Connecting Us to the Historical Fight for Justice 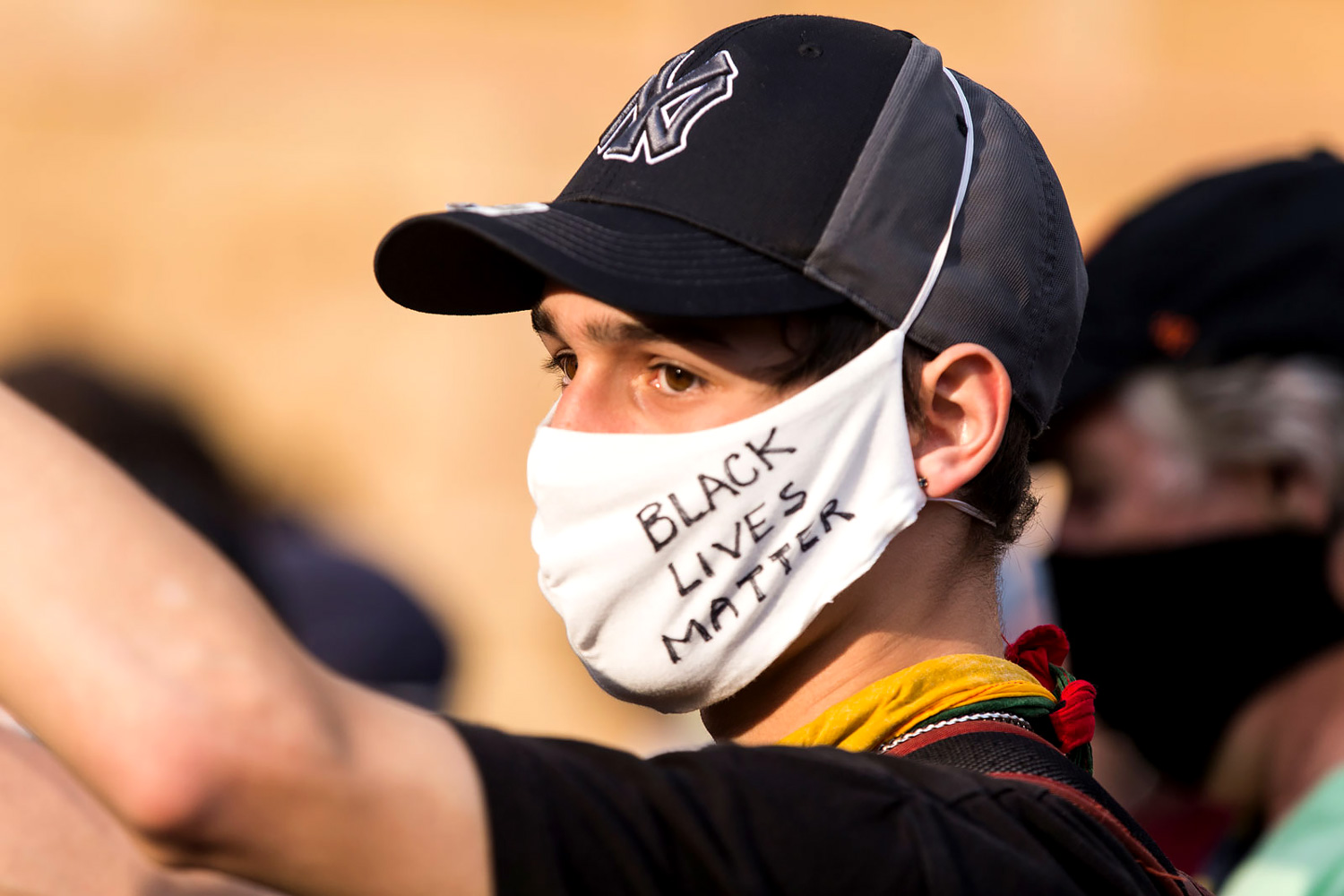 Through a combination of attention and language data, we see evidence of Black media creating narrative arcs that connect news events across subjects with a core and common focus on an issue of injustice. Issues are covered from a systemic frame, which is often unique from mainstream media. Illustratively, in the case of coverage of sexism and #MeToo, “systemic” and “intersectional” are words within the top 100 most frequently used by Black media, but not by mainstream coverage. Similarly, across topics, the word “justice” itself was frequently in the top words in Black media’s coverage. The cross-cutting justice issues focused on by Black media are detailed further in this section.

Figure XII. Word tree showing the keyword “justice” in context within coverage of religion in Black media, one of the issues in which “justice” was uniquely prevalent

Click the image to see a higher resolution version of this tree map.

Early voters wait in a long line outside of the City-County Building on Oct. 16. (Photo: Tyler Fenwick/Indianapolis Recorder) 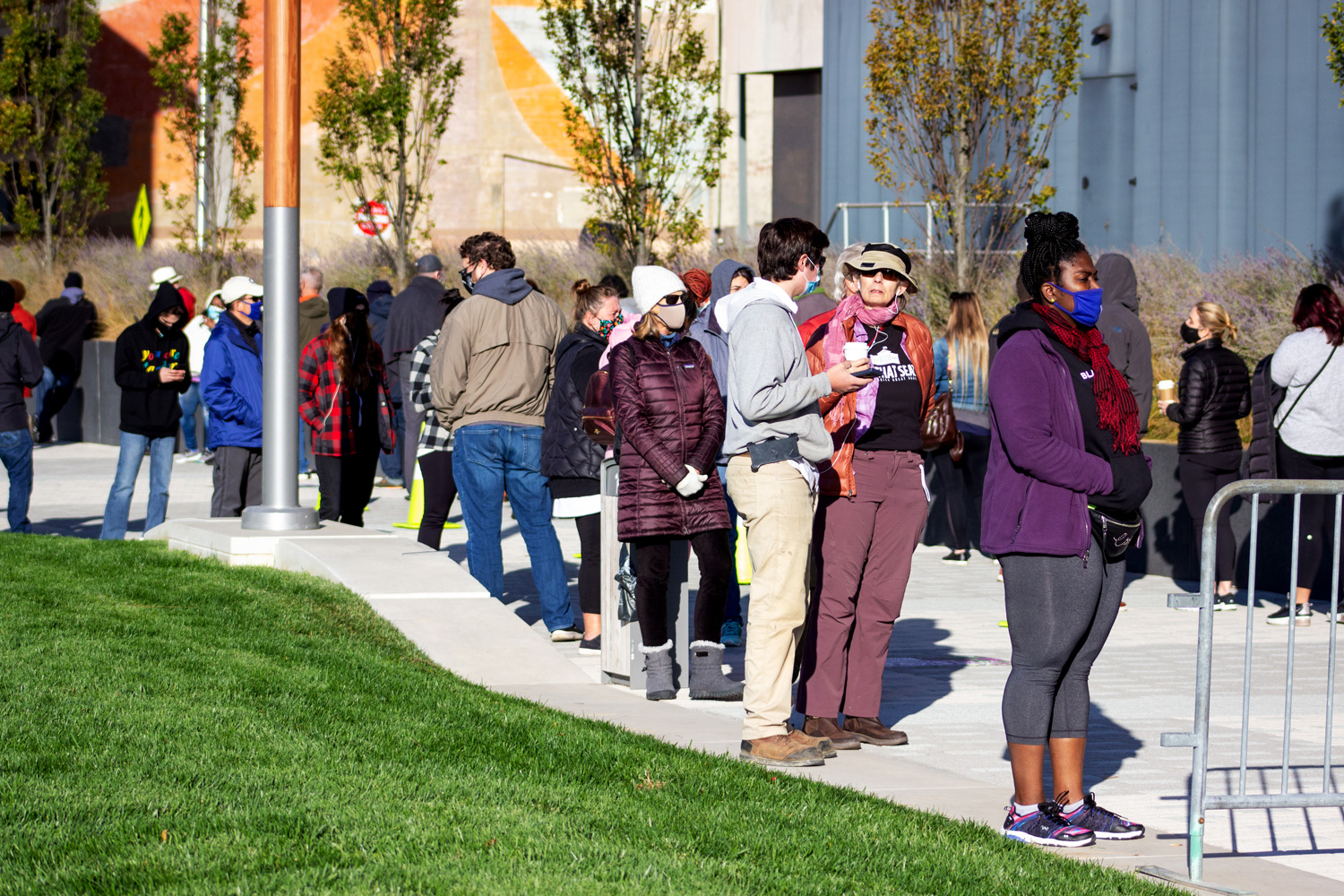 Early voters wait in a long line outside of the City-County Building on Oct. 16. (Photo: Tyler Fenwick/Indianapolis Recorder)

Figure XIII. Article excerpt from The Root focusing on voting access and the pandemic 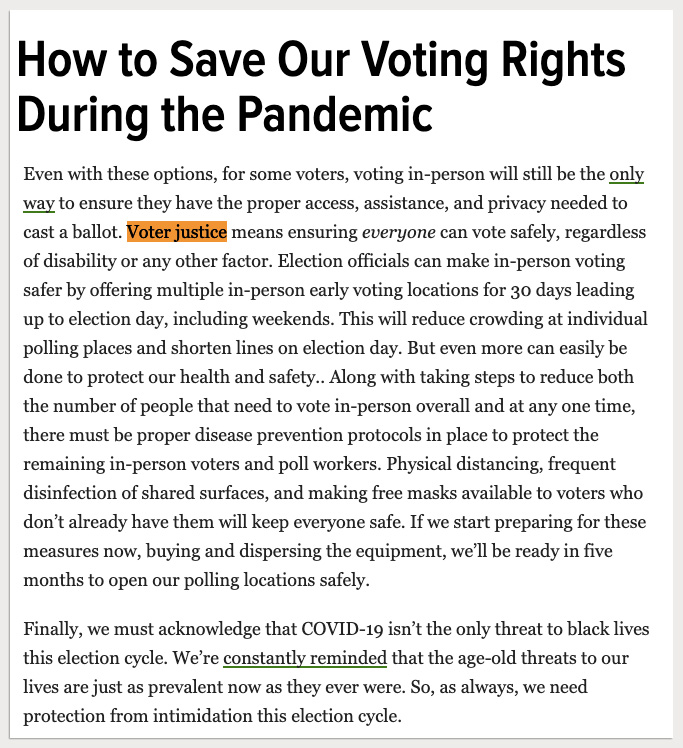 Black media’s greater focus on Georgia in the context of politics is further evidence of this trend, as it is a state at the forefront of voting rights struggles and advances. Black media included “Georgia” in the top 100 words for all politics coverage, while mainstream media did not. Georgia was also uniquely centered by Black media in the subtopics of immigration, Donald Trump, and fraudulent election claims.

Finally, this strong emphasis on voting and democratic rights may explain language differences in the way Black media covered the January 6, 2021 Capitol insurrection. Black media was more likely than mainstream media to use terms that more clearly and starkly labeled the event and involved individuals as threats, including: “insurrectionists,” “supremacists,” “terrorists,” and “lies.” This is mirrored in language choices uniquely prevalent in Black media in other political subtopics: “lie, “mob,” “stolen,” and “steal” in coverage of fraudulent election claims; and “dangerous,” and “supremacists” in coverage of QAnon. 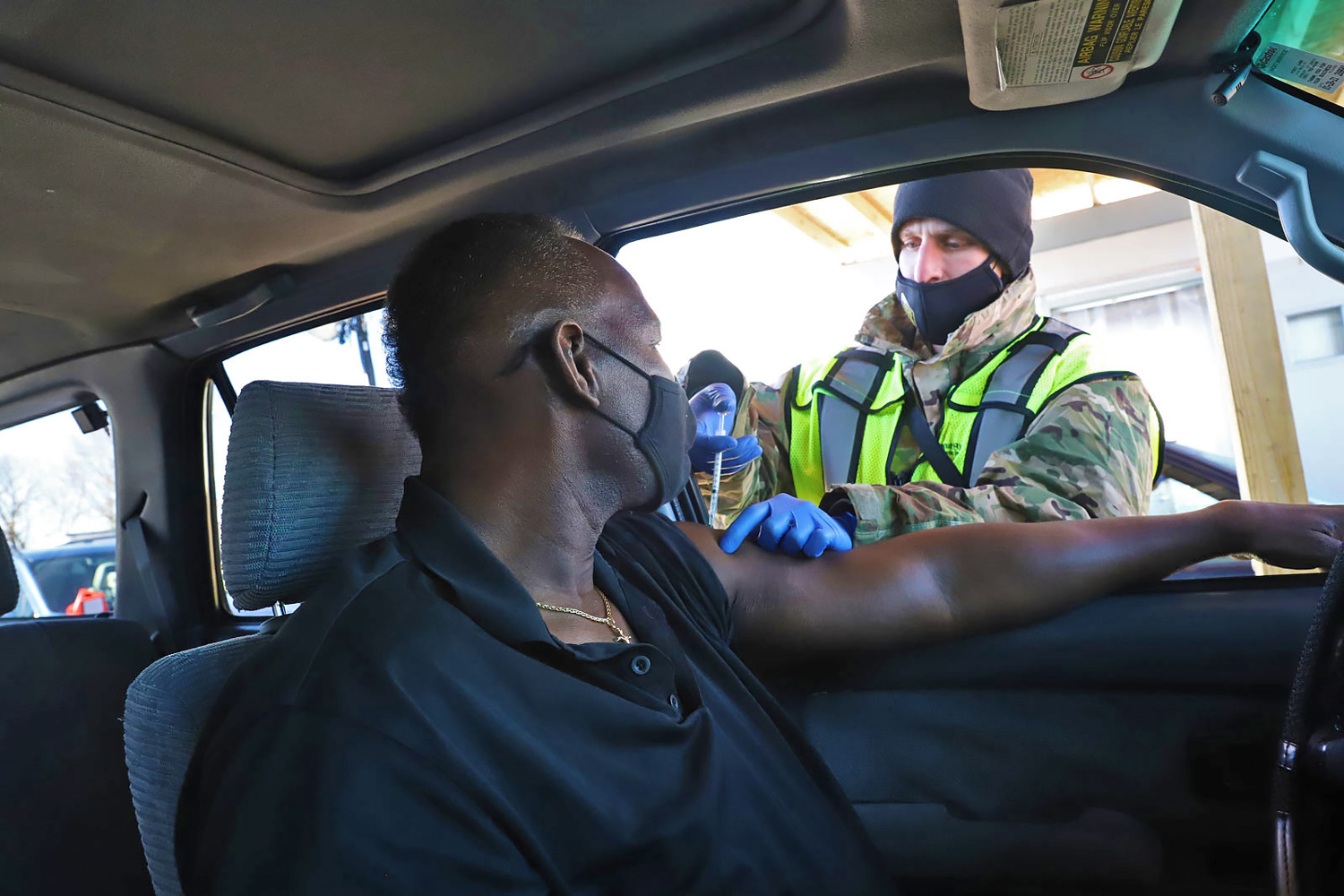 The related issue of medical distrust was uniquely emphasized by Black media. Within COVID coverage, for articles about vaccine hesitancy, the words “access,” “trust,” and “efficacy,” were among the most frequently used words by Black media only. Coverage of maternal health provided a strong example, where Black media had “bias,” and “racism” among the most prevalent words, but mainstream media did not. Black media also uniquely emphasized “racism” in the coverage of diabetes, hypertension, healthcare, and non-COVID health stories. Perhaps most notably, Black media had the Tuskegee experiment and the word “history” among the top words in coverage of medical mis/distrust, while mainstream media did not center it.

A crowd of more than 600 cyclists participated in the Ride for Black Lives, taking over city streets as they made their way from Franklin Park to the Boston Common. (Photo: Bay State Banner) 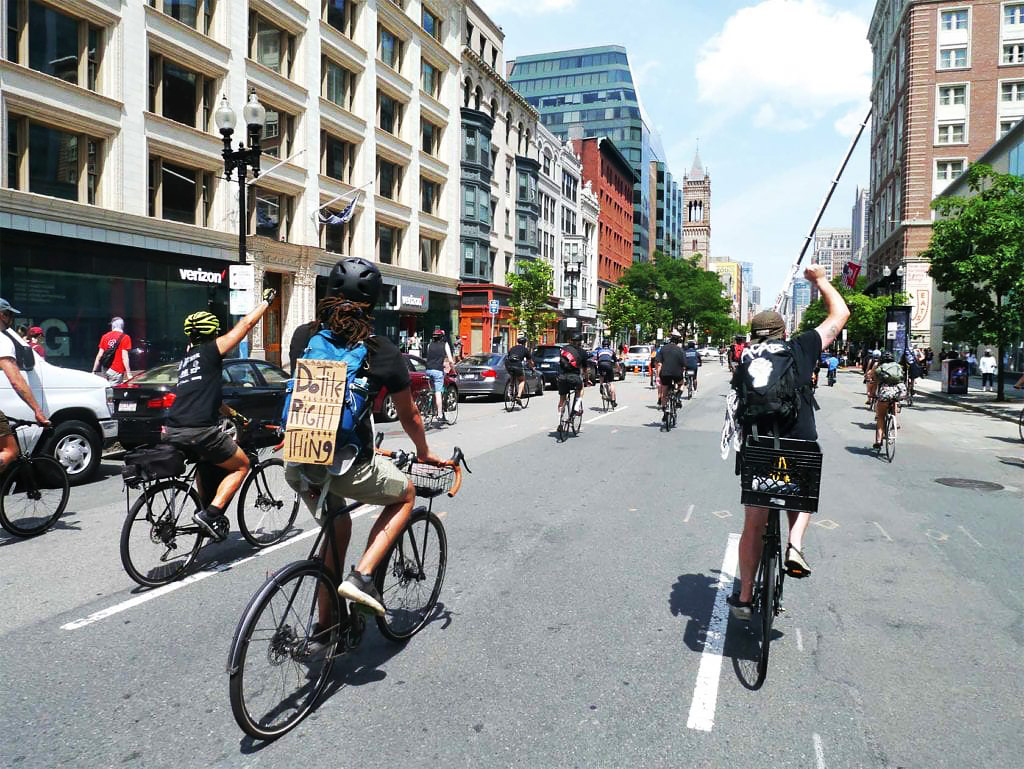 A crowd of more than 600 cyclists participated in the Ride for Black Lives, taking over city streets as they made their way from Franklin Park to the Boston Common. (Photo: Bay State Banner)

Figure XV. Excerpt of an article run in Dallas Weekly and authored by NNPA covering mass incarceration and linking it with lynching and Jim Crow 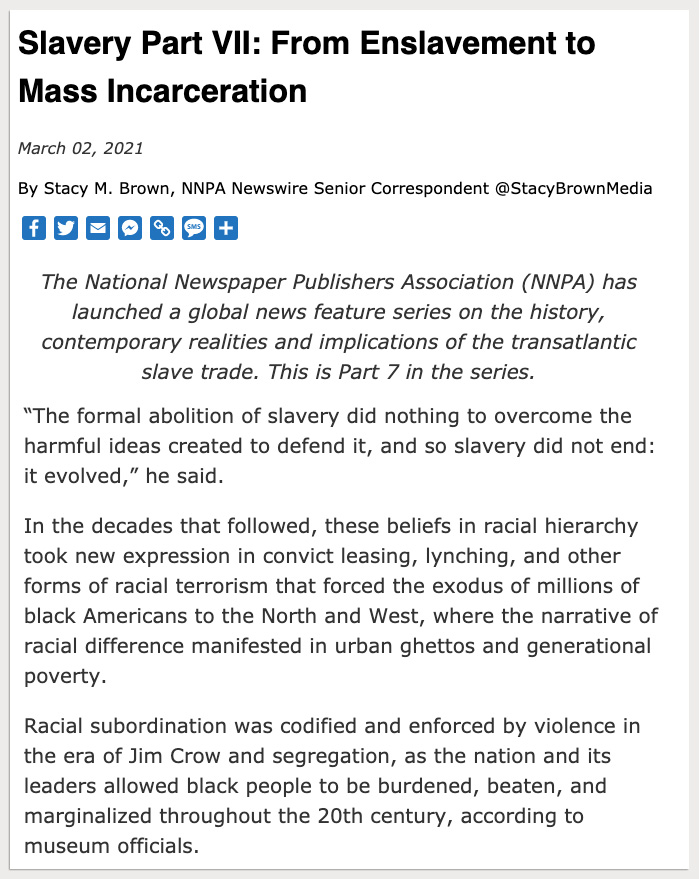 In addition to a different frame in coverage of these topics, Black media uniquely connected coverage in other news topics to the issue of policing and incarceration. In coronavirus coverage, the terms “prison” or “prisons” were among the top 100 most frequently used words in Black media’s coverage of social distancing, testing, and comorbidities and risk factors. These terms and populations were not similarly emphasized in mainstream media’s pandemic coverage, despite the stark increased risk incarcerated individuals face during the pandemic. 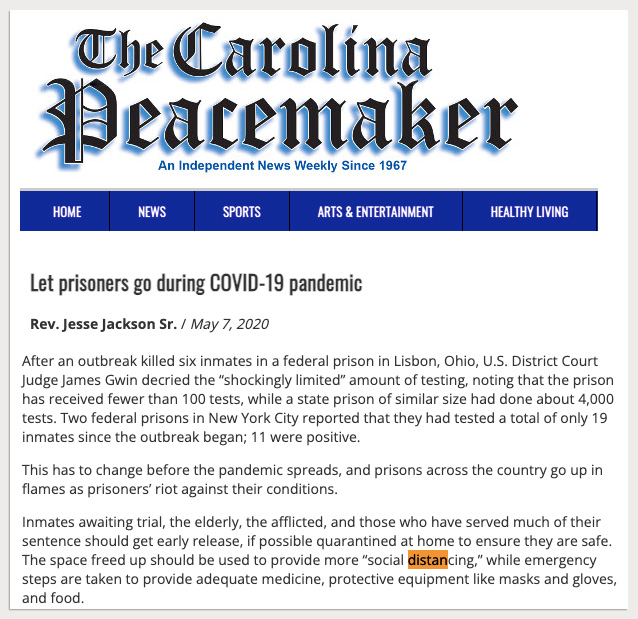 Across topic areas but particularly in coverage of health, Black media emphasized threats to or inadequacy of food, housing, and education, often grouping them together narratively. These keywords were uniquely prevalent when compared with mainstream media in the following diverse subtopics: 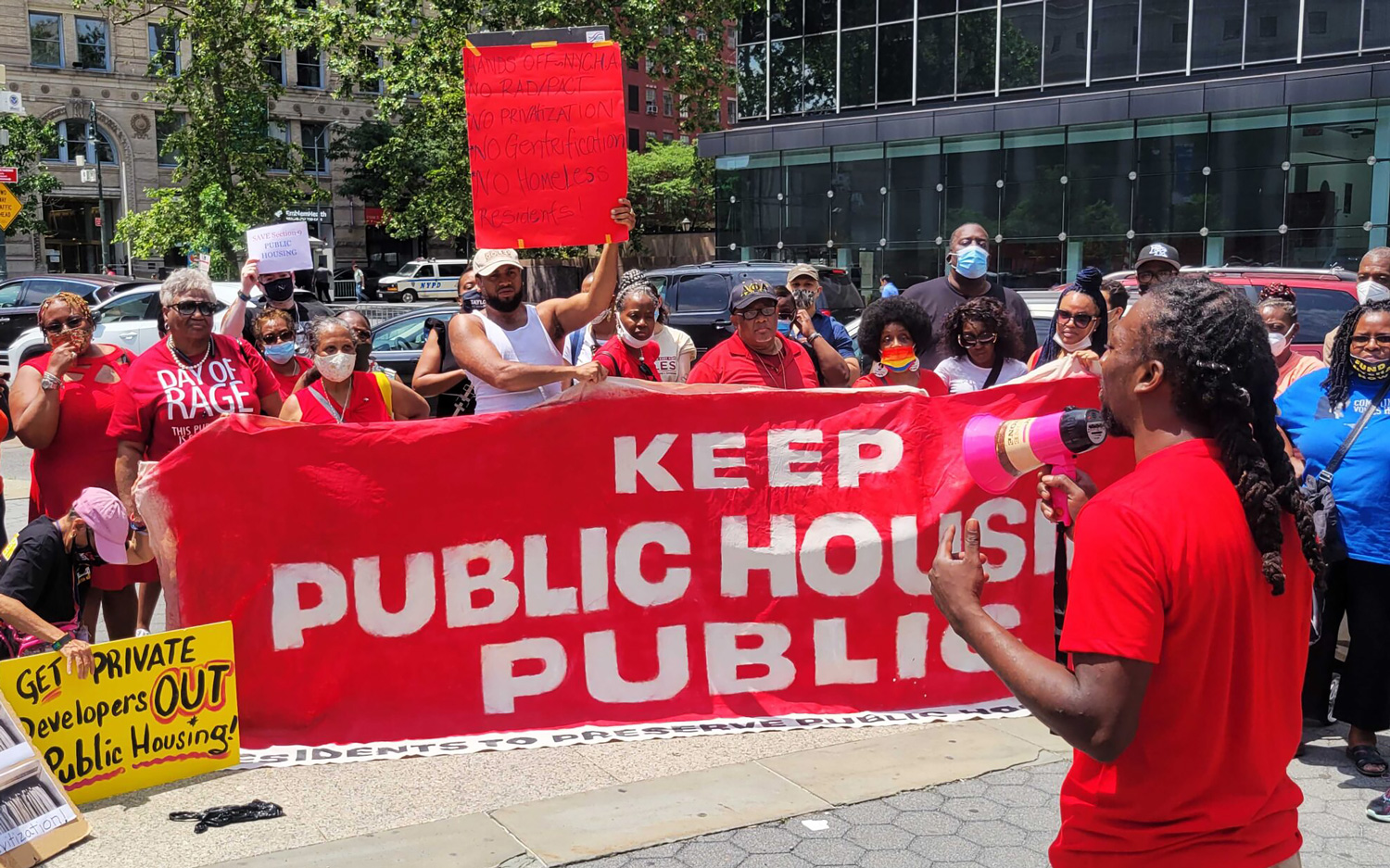 Black media not only connects news events across topics in reporting, but also connects present events to the historical record, keeping track of Black experience. The Tuskegee experiment is prominently featured in Black media’s coverage of medical mis/distrust. Jim Crow is emphasized in coverage of mass incarceration. Lynching is frequently included in coverage of slavery and Juneteenth. Even the word “history” itself is uniquely prevalent in Black media across a diversity of topics.

One reporting practice in particular makes this quite clear: the inclusion of the names and stories of previous victims of racist or police violence in stories about new killings. Ahmaud Arbery’s name was among the top mentioned words in coverage of George Floyd. Trayvon Martin was among the top terms in coverage of Ahmaud Arbery. Mainstream media did not name these previous victims with comparable frequency. 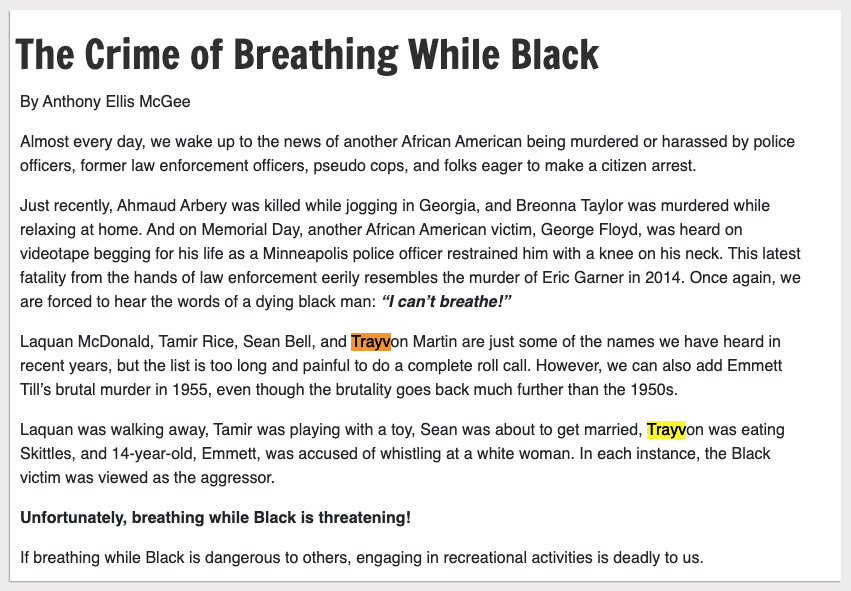