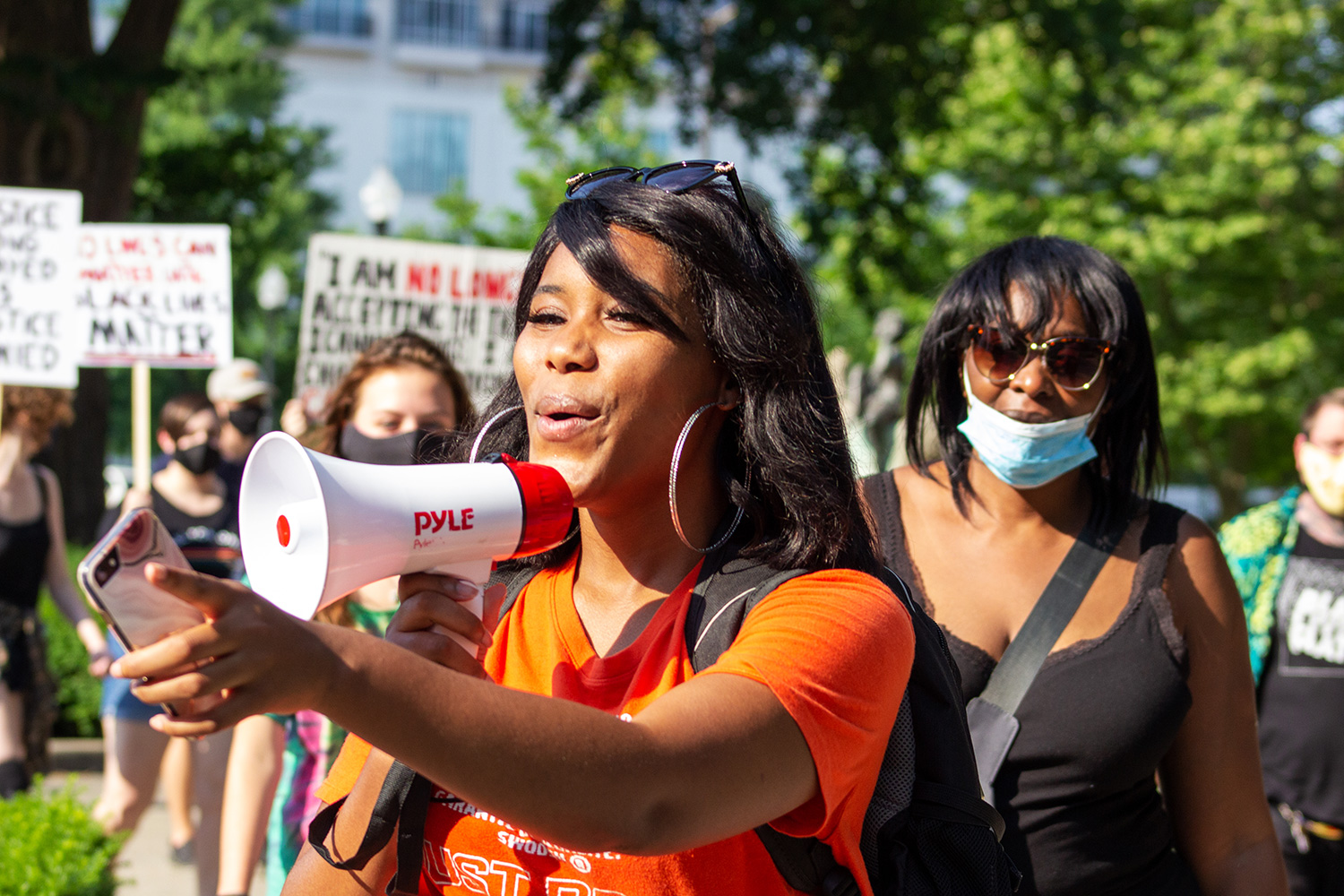 Looking at the concept of attention to topics through the metric of normalized percent of stories matching our topic queries, we can see that Black media has higher coverage levels on several key issues. Not only did Black media write more about issues such as racism, health disparities, and voting access, but the proportion of coverage these issues accounted for in Black media was as much as six times higher than in mainstream media.

Nearly one in every four articles in Black media mentioned racism and related issues. 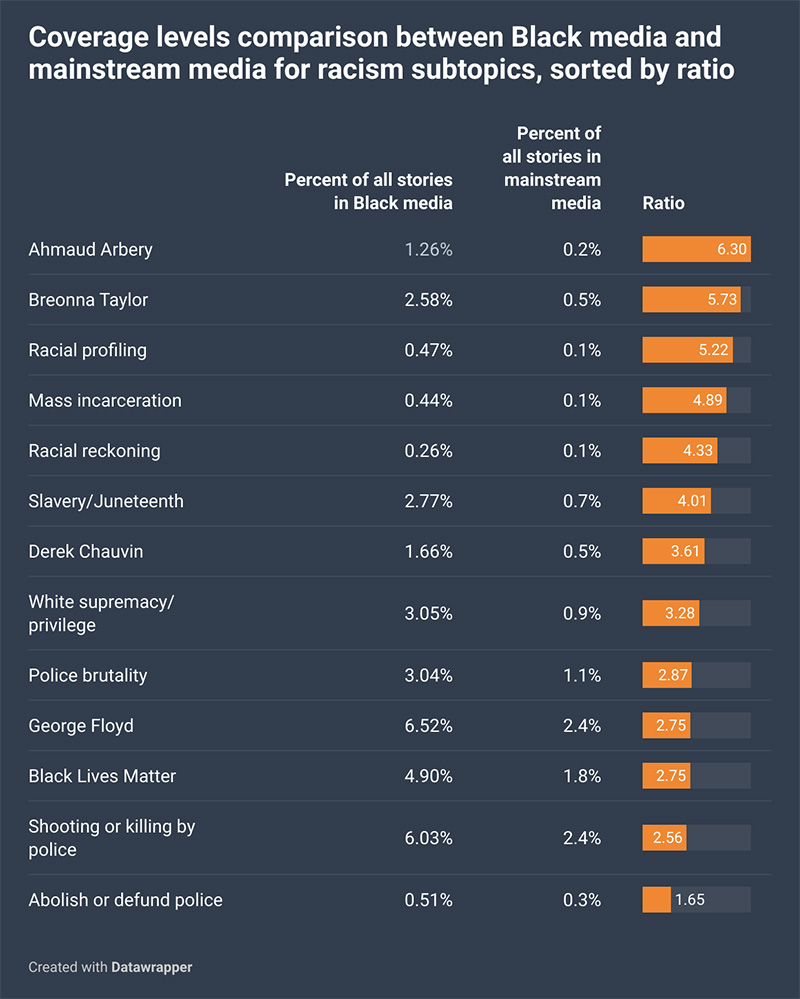 The single highest day of coverage to the subject of racism by Black media was June 14, 2020, when coverage reached 68% of stories amid massive national response to the murder of George Floyd. This is twice the level of the highest date in mainstream media, when coverage reached 34% on June 7, 2020. Between late May and early June 2020, in the height of the news cycle around Floyd’s killing, peak date levels of coverage to racism subtopics were consistently twice as high in Black media as in mainstream media.

Figure I. Headline from Black Star News in the wake of George Floyd’s murder and the ensuing protests 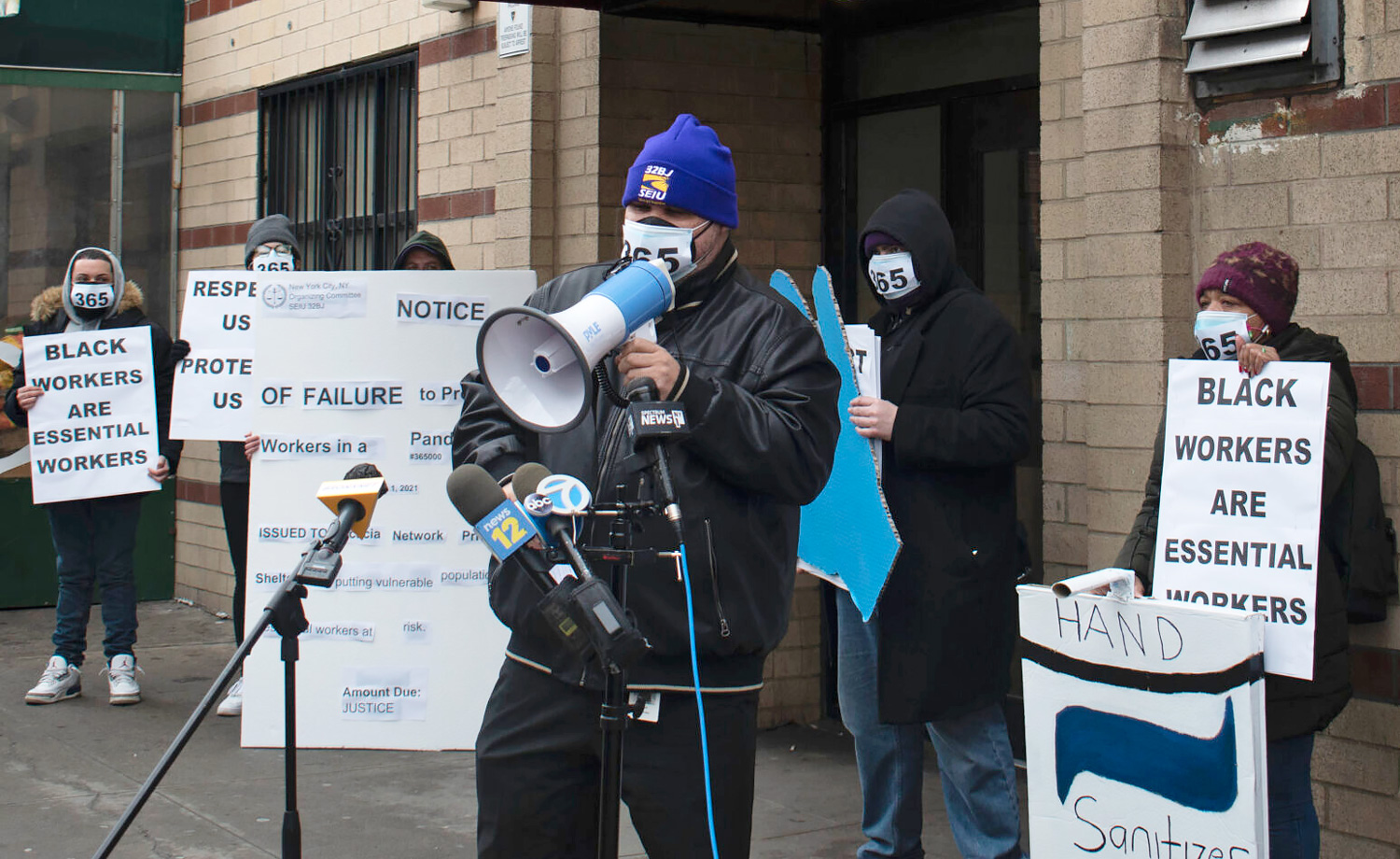 Within coronavirus coverage, the proportion of articles mentioning structural, systemic, or clinical racism, health disparities or inequities, or disproportionate impacts on Black people or communities was five times higher in Black media than in mainstream media. Such articles accounted for only 1.18% of mainstream media’s coronavirus coverage, but 6.29% of Black media’s.

Similarly, within coronavirus coverage, Black media mentioned essential or frontline workers in 3.37% of stories, while mainstream media mentioned these workers in only 1.75% of coronavirus stories, a difference of nearly a factor of two. Again, during the first wave of the pandemic in April and May 2020, daily coverage to COVID-19 and frontline or essential workers reached almost 6.5% of all stories published by Black media, while staying below 2.5% of all stories in mainstream media.

Black media covered all of our selected health subtopics at higher levels than mainstream media. The health conditions and subtopics were specifically selected by the research team for their pertinence to Black individuals and communities. Similar to what was seen in coronavirus coverage, health disparities was the subtopic with the greatest difference in coverage levels between Black and mainstream media. 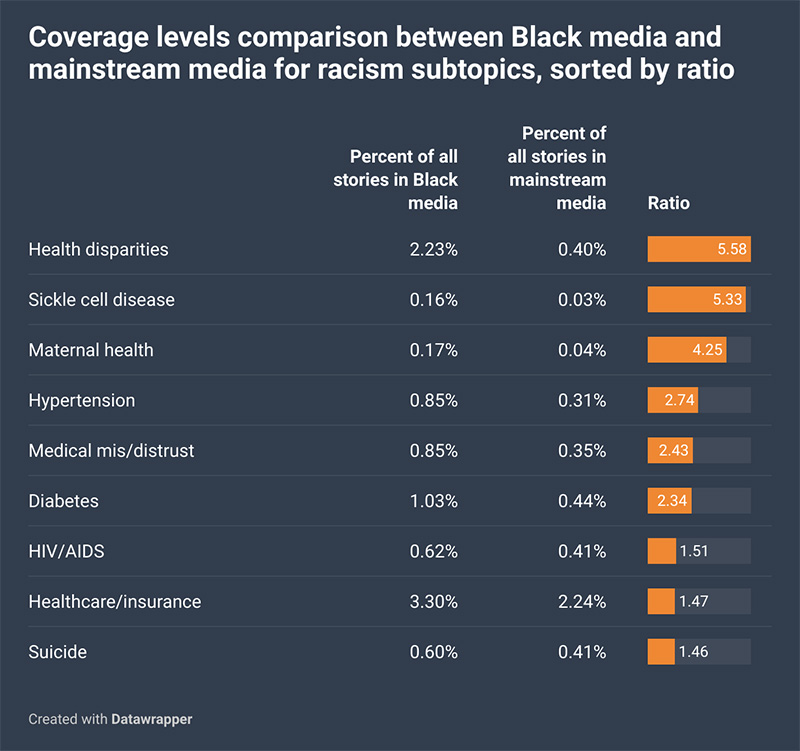 Similarly, medical mis/distrust is mentioned in over 3% of health stories in Black media, and on individual dates coverage rose to as high as 4% to 5% of all stories. But in mainstream media, only 1.5% of health stories mentioned the subtopic, and on no single day did coverage reach 2% of all stories. This was at a time when the issue of medical trust has been of national importance with the rollout of the coronavirus prevention measures, including vaccines.

In Black media, voting access was mentioned in 4% of all stories, and 12% of politics stories. Coverage reached a peak of over 18% of all stories in July 2020, in reporting on the death of Representative John Lewis. Comparatively, in mainstream media, voting access was mentioned in less than 1.5% of stories overall and 5% of politics stories, and there was no discernible increase to the subject around any key events. This is particularly notable as the query parameters for voting access included the terms “voter registration” and “mail-in voting”; despite mail-in voting being a large component of mainstream media’s political coverage in conjunction with accusations of a fraudulent election, Black media still covered the overall issue more than twice as frequently. 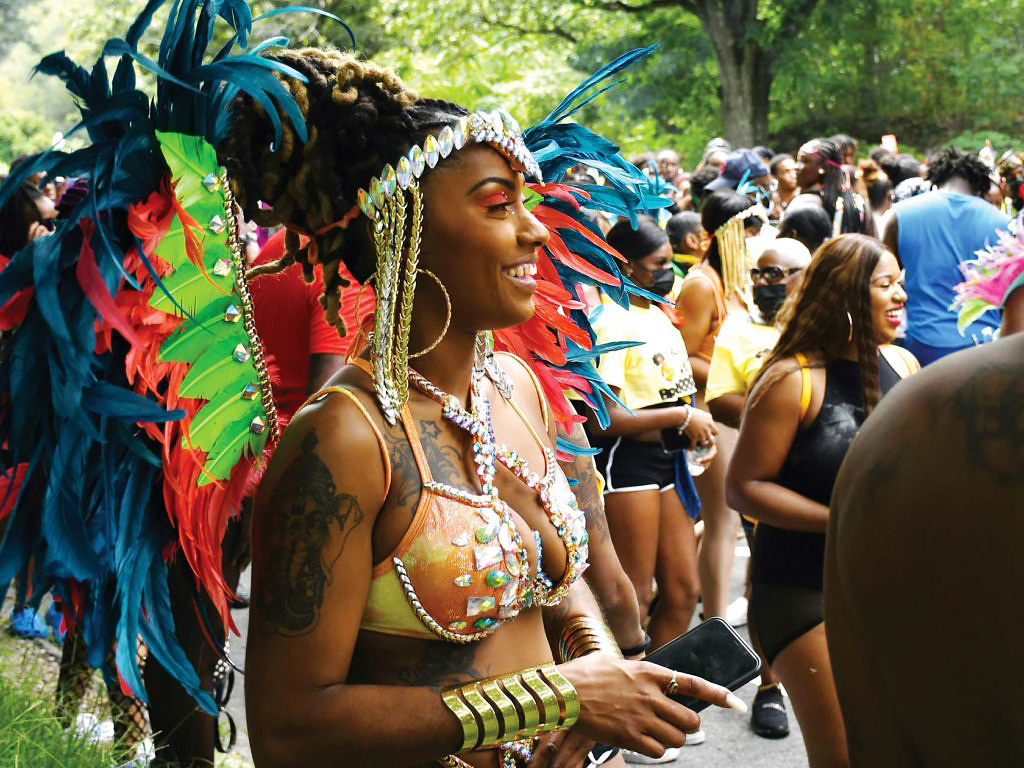 Africa and the Diaspora

Looking at coverage to the African continent, African nations, and other nations and regions with high African-descendant populations (outside of the US and UK), Black media had 8.85% of stories mentioning one of these areas, while mainstream media only featured them in 4.81% (ratio of 1.84). Moreover, when examining the various geographic locations mentioned in the coverage, mainstream media is still including more mentions of European and Asian nations than African or diaspora countries. Black media covered a wide variety of news stories about these countries, while mainstream media was focused more on African countries in the context of the coronavirus pandemic and international relations, specifically with respect to Chinese influence.

Figure II. Article excerpt from The Conversation, example of content from mainstream media that mentions Africa 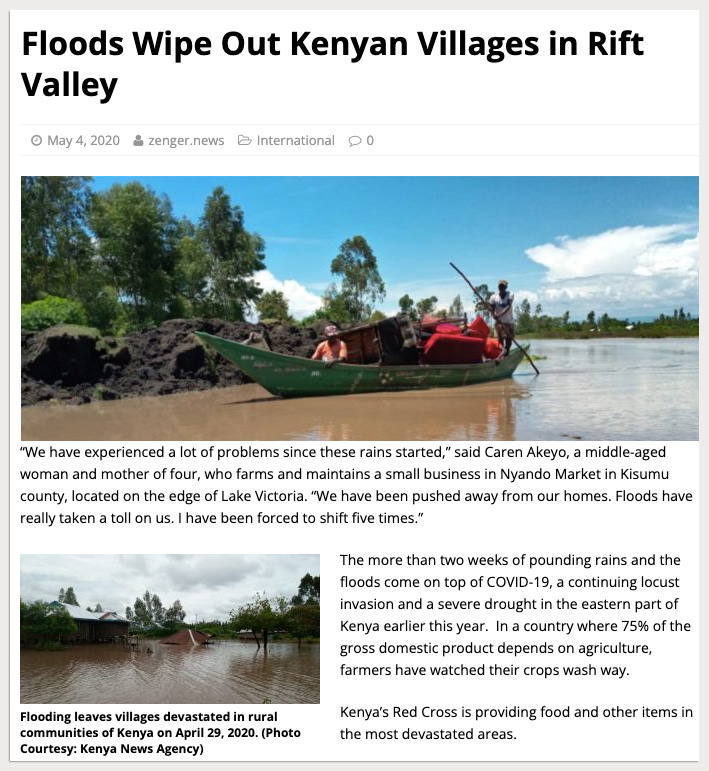 Table IV. Countries Mentioned Most Frequently in Coverage of Africa and the Diaspora in Black Media

Table V. Countries Mentioned Most Frequently in Coverage of Africa and the Diaspora in Mainstream Media

Black Media Leads the Way on Topics Related to Race 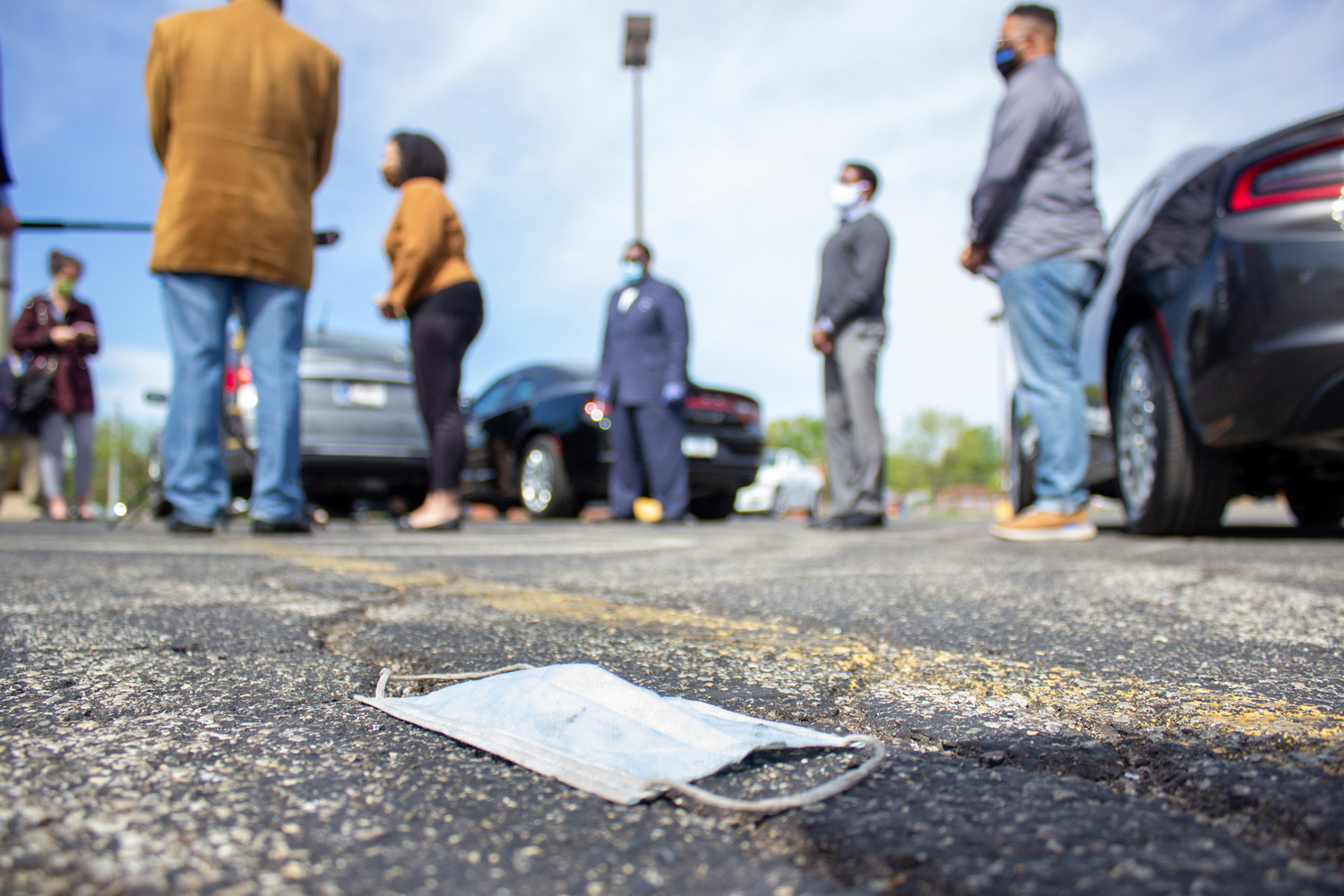 A face mask lay on the ground in an old Value City parking lot at the corner of 38th Street and Arlington Avenue, where city officials and community leaders asked residents in May to not participate in large gatherings. (Photo: Tyler Fenwick/ Indianapolis Recorder)

On subjects related to race, Black media not only has consistently higher levels of coverage than mainstream media, but also puts focus on key race-related stories earlier in the news cycle than mainstream media. A clear way to observe this pattern is to compare daily coverage levels for a news topic over time.

As noted earlier, coverage levels to the disproportionate racial impact of the pandemic were five times higher in Black media than in mainstream media. Examining daily coverage levels over time, Black media’s coverage quickly climbs to a peak of nearly 2.5% of all stories published within the first month of the pandemic. By April 8, coverage had reached a primary peak of nearly 7.5% of all stories. At the same time, mainstream media was only starting to cover the issue, with less than 1% of stories mentioning it. Mainstream media did not reach a peak of coverage to the issue until two months later on June 6; even then, coverage was just 2.65% of all stories. It was also tied in with coverage about George Floyd’s murder and the ensuing racial justice social movement. 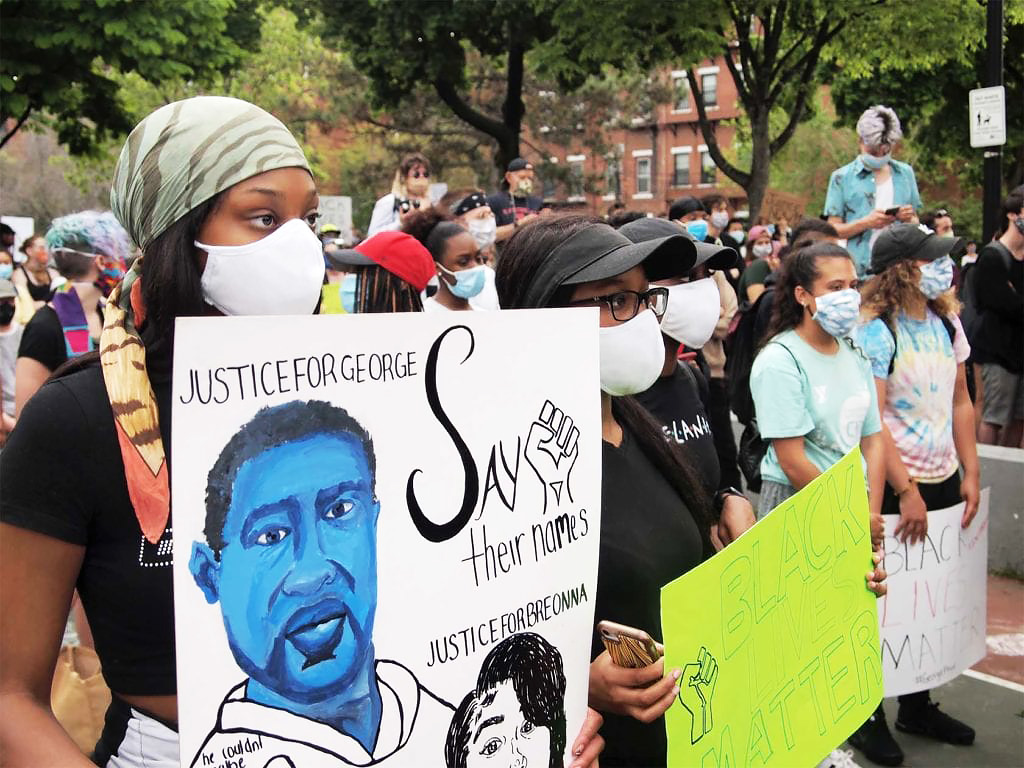